This is the first of three articles examining the patent activities of the Russell Group of UK Universities.

The Russell Group of UK Universities

The Russell Group 24 members are world-class, research-intensive universities. They are unique institutions, each with their own history and ethos, but they share some distinguishing characteristics.

They are committed to maintaining the very best research, an outstanding teaching and learning experience and unrivalled links with local and national business and the public sector.

Who are the Russell Group of Universities

Russell Group universities have huge social, economic and cultural impacts locally, across the UK and around the globe:

Our members attract students and staff from around the world and work with major multinational businesses and international organisations:

Russell Group members also have a strong role and influence within their regional and local communities, collaborate with businesses on joint research projects and supply highly-qualified and highly-motivated graduates to the local workforce. 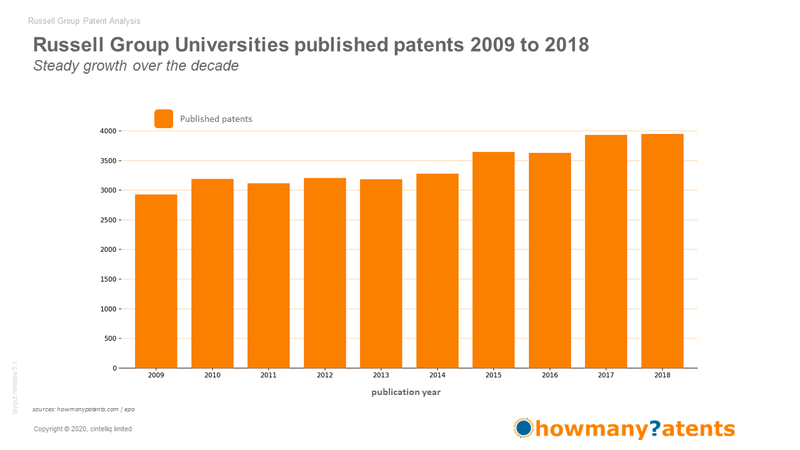 About two-thirds have been filed since 2009, with one-third were filed prior to 2009 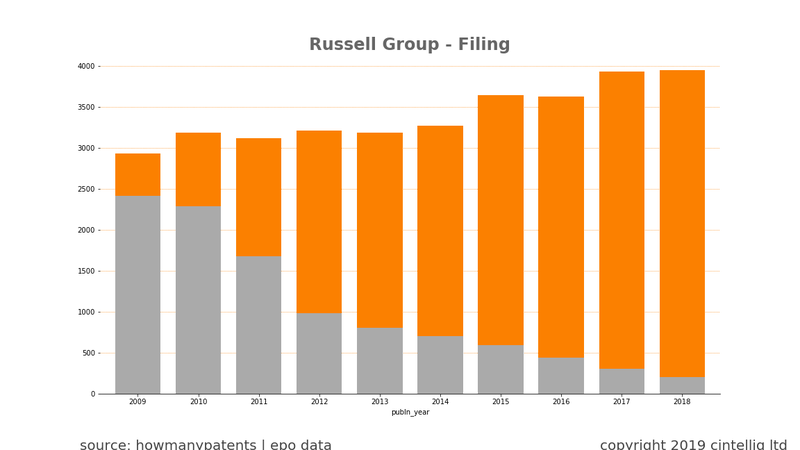 It is worth noting patents published in 2018 and filed prior to 2008 are at least ten years old - and those filed even earlier may be reaching their expiration date.

Plotting patents by filing year shows the current published patents while only published between 2009 and 2018 actually are based on inventions initially filed many years earlier. So while we are analysing patents published between 2009 and 2018 it is important to see they have filings dates going as far back as 1988, with the most recent being in 2018. Of the published patents just over 10,000 patents were filed before 2009, and nearly 24,000 filed since 2009.

The number of filed patents see a peak between 2009 to 2012 and then gently fell from 2013 onward. This is due to the simple reason when patent applications are filed they are not published straightaway, it can take 12 or months for the application patent to be published, and several years should the patent eventually be granted.

As a group the Universities have filed more than 6,300 'separate' inventions since 2009

To determine the number of "unique" inventions since 2009 we first select only patent families with an initial filing date on or after 2009. The published patents of these patent families are represented as dark-grey in the left-hand-side bar chart. Through the ten-year period we see the number of published patents increase year-on-year. Now if we separate out the first publication of these patent families - highlighted in orange in the right-hand-side chart, we can see a steady, almost constant, number of "unique" inventions filed each year.

The dark-grey highlights represents the International extensions of the initial patent - the filing in other countries, and in some cases granted patents.

Sign-up to receive an email when part II is published

As a single authority GB filings account for the largest percentage of published patents - which is probably not too surprising given these Universities are UK based.

For those of you who are curious RoW (rest of world) and includes 57 different patent authorities or countries, these are :

Analysing the patents in terms of publication country and filing year shows GB filings occurring predominantly after 2009 . This simply reflects the fact most patents are first filed in the home country - in this case GB - and are published 12 to 18 months after initially filing. The large number of patents designated WO, EP and US filed since 2009 are most likely the initial international filings of GB patents. The high number of international filings is an indication patent owners see commercial opportunities for their inventions in several of the world's key markets - The United States, China, Europe, Japan and Korea seeking to protect their intellectual property in the main key markets for their invention. 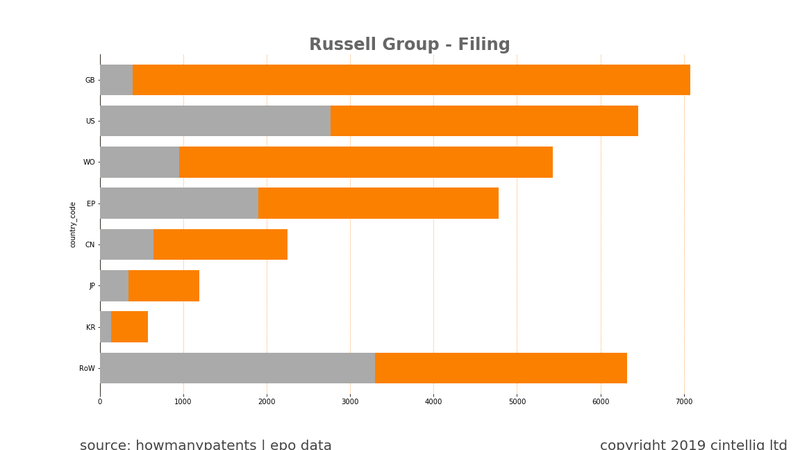 You may be interested in parts II and III:

Sign-up to receive an email when part II is published