This is the second of three articles examining the patent activities of the Russell Group of UK Universities.

The Russell Group of UK Universities

The Russell Group 24 members are world-class, research-intensive universities. They are unique institutions, each with their own history and ethos, but they share some distinguishing characteristics.

They are committed to maintaining the very best research, an outstanding teaching and learning experience and unrivalled links with local and national business and the public sector.

Who are the Russell Group of Universities

Russell Group universities have huge social, economic and cultural impacts locally, across the UK and around the globe:

Our members attract students and staff from around the world and work with major multinational businesses and international organisations:

Russell Group members also have a strong role and influence within their regional and local communities, collaborate with businesses on joint research projects and supply highly-qualified and highly-motivated graduates to the local workforce. 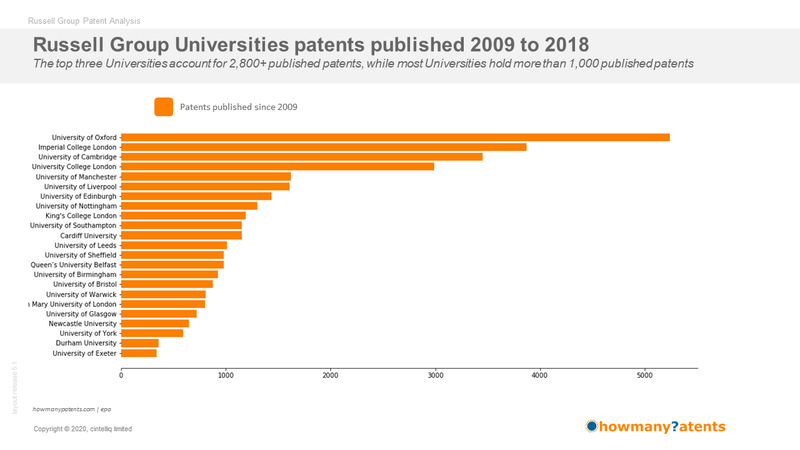 Published patents rise and fall over the decade

Group I - those with more than 400 published patents annually

Group II - those with 200 or less published patents annually 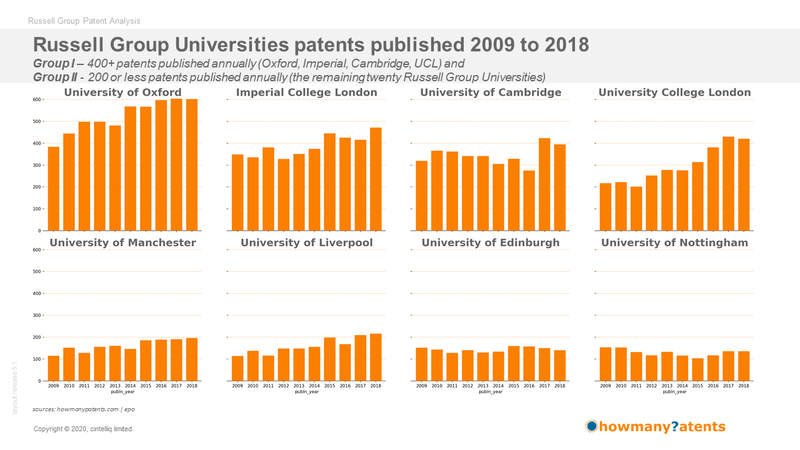 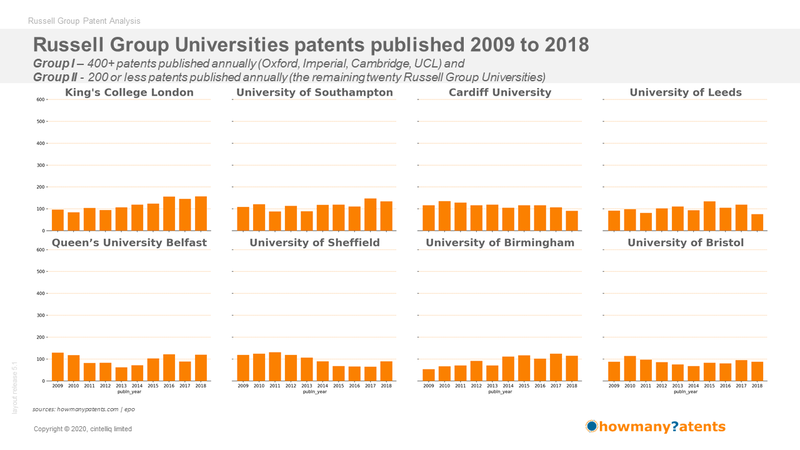 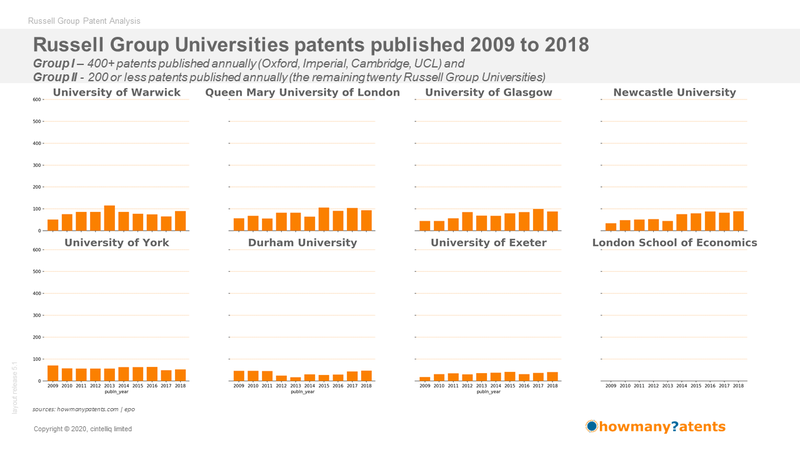 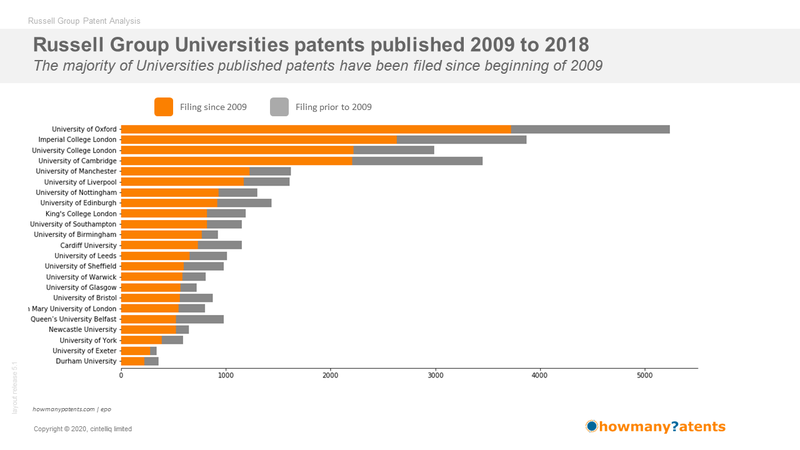 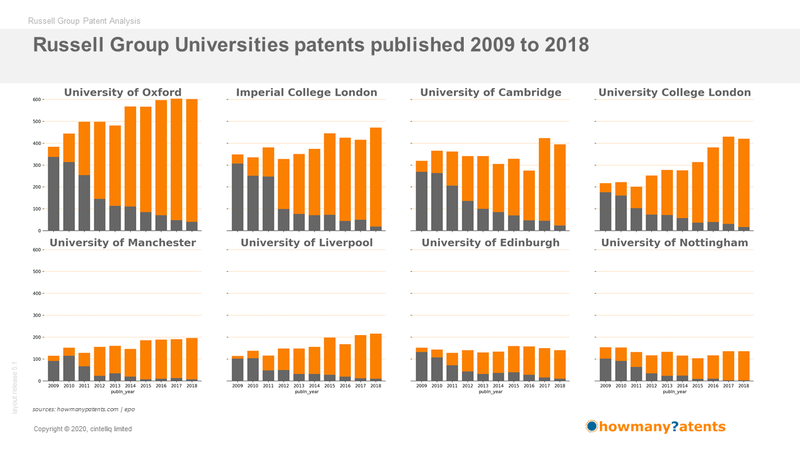 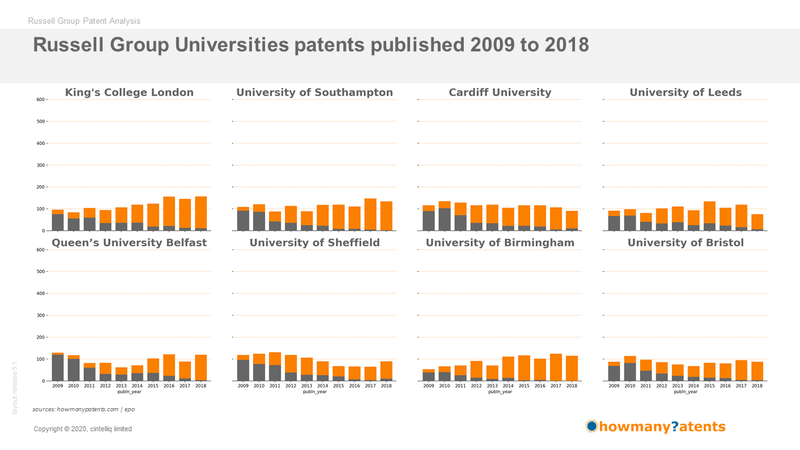 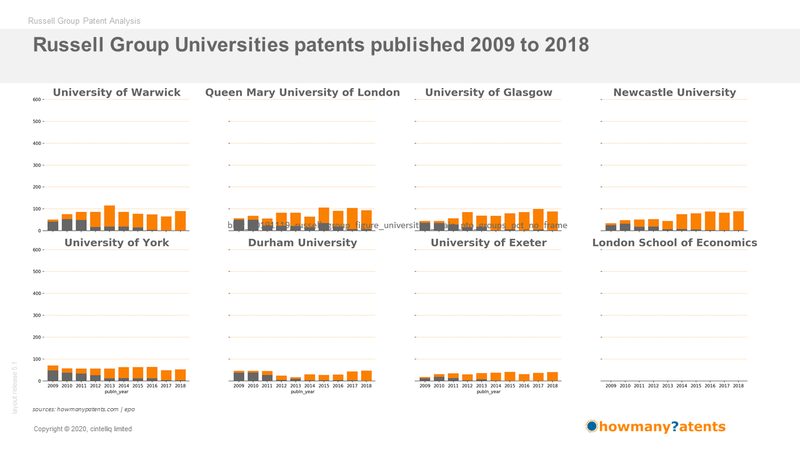 Sign-up to receive an email when part III is published

All Russell Group Universities seek international protection of their intellectual property. Country filings by Universities show similar profile of filing in GB the home country and filing internationally. Outside of GB the many patents are filed in WO and EP - and more specifically US, JP, CN and KR. The RoW (rest of the world) accounts for fewer patent filings - suggesting Universities are more focused on the main patent offices - US, EP, JP, CN, and KR. 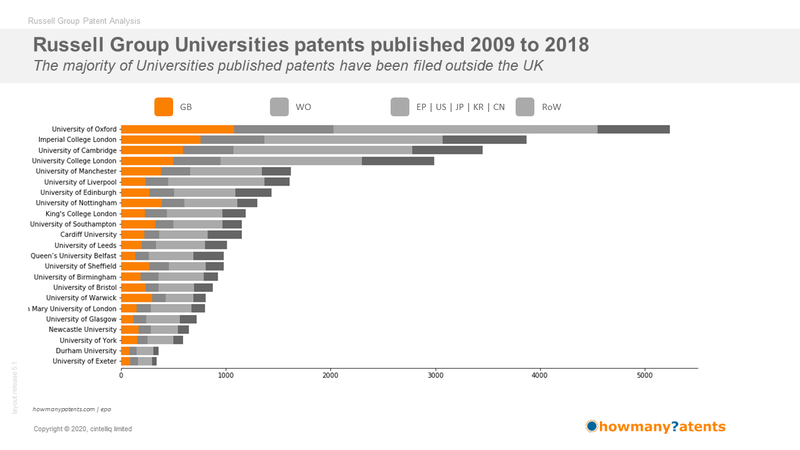 Most Universities file in the GB and this often represents the biggest country share of published patents. This is understandable as these are UK based Universities and make their initial filings in the home country (GB). Eight Universities have US filings larger than their GB filings. The University of Liverpool has filed more patents in China(CN) than they have in any other country. 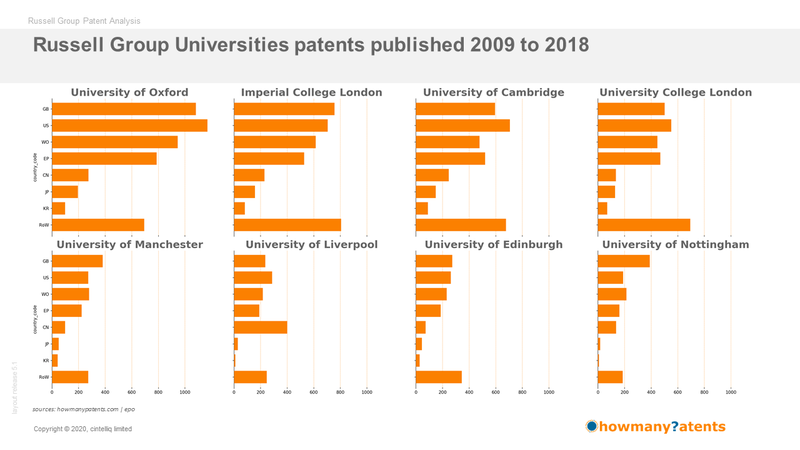 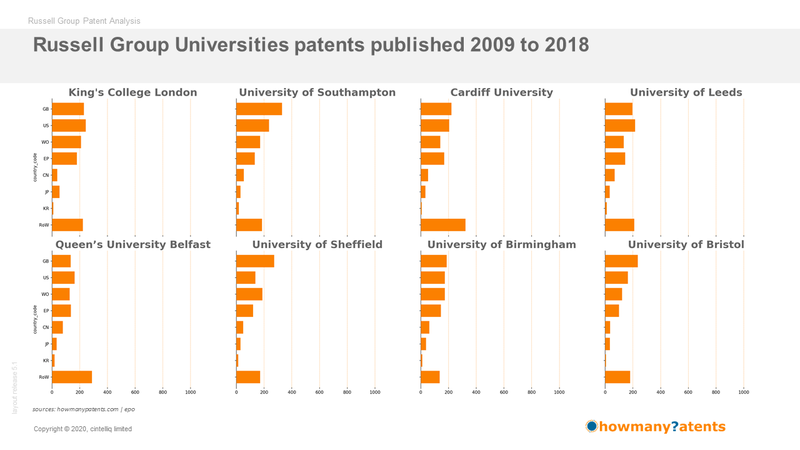 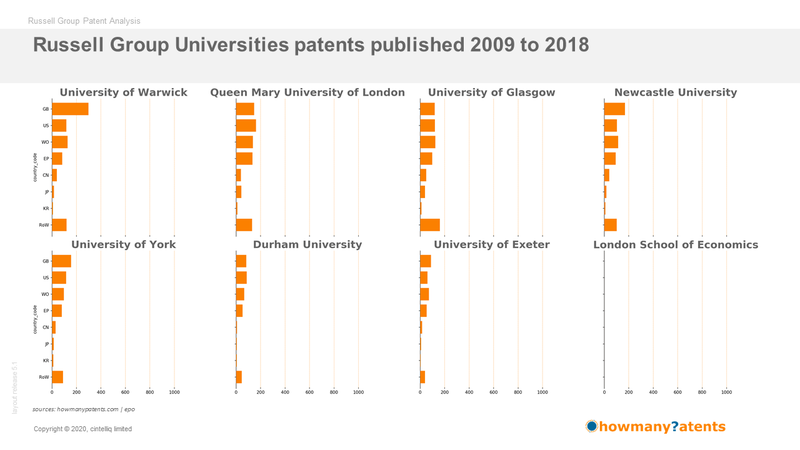 For most Universities home country filings - those listed as GB - account for between 14% and 37% with the majority between 17% and 26% of their published patents. 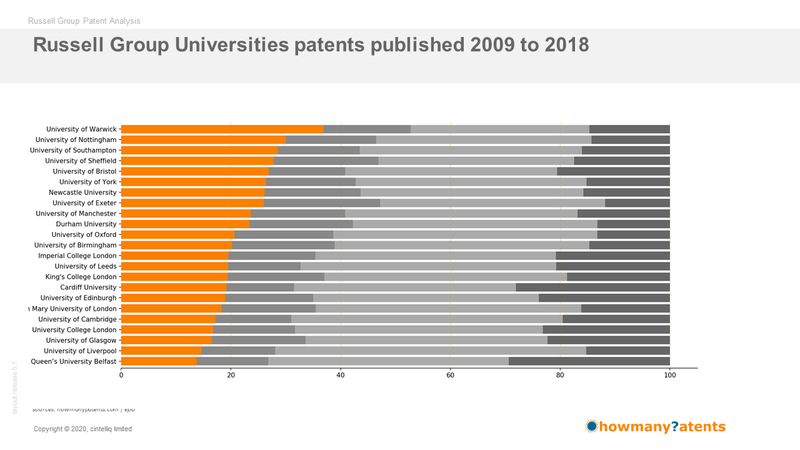 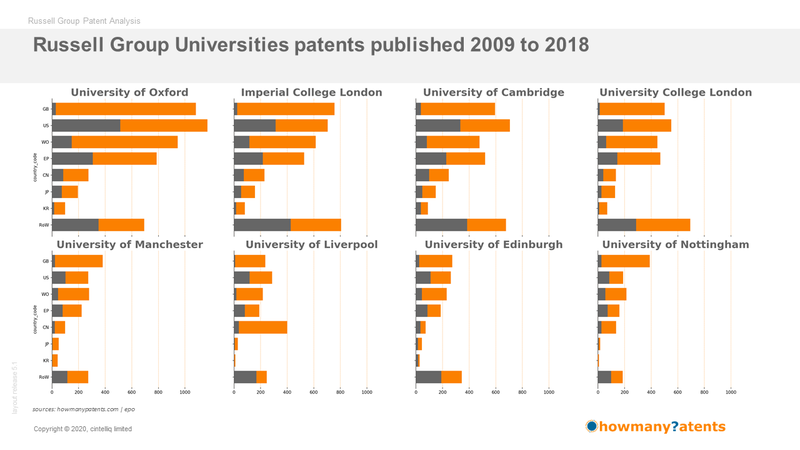 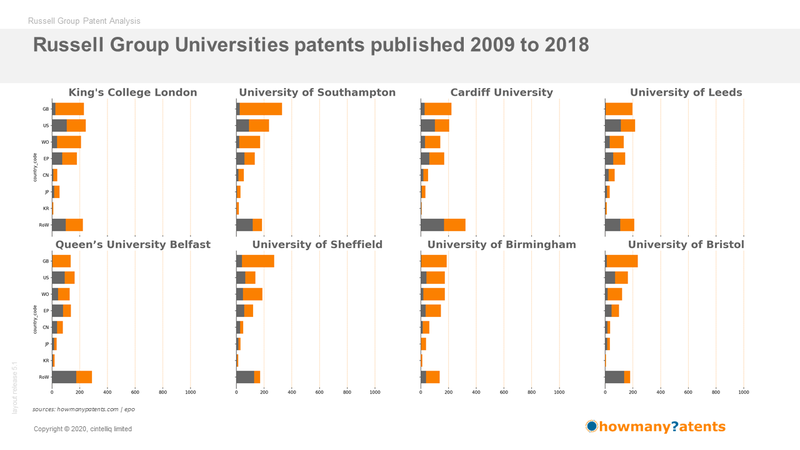 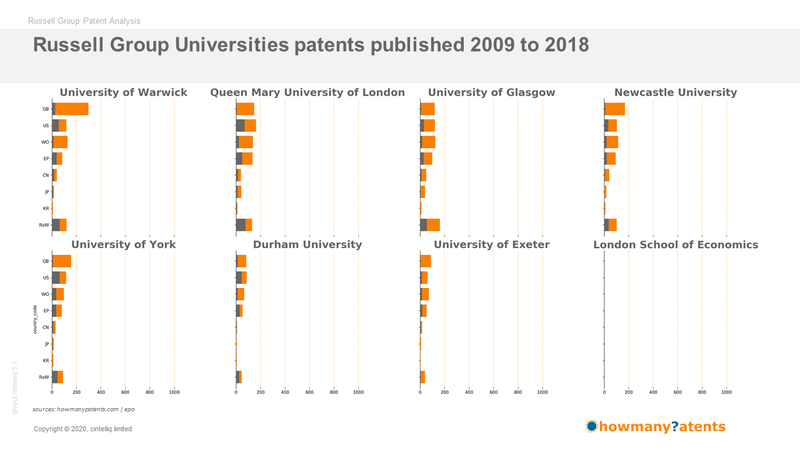 Ranking the Russell Group of Universities in terms of their granted patents reveals those ranked high on the list are not always those with an eqaully large number of application patents. 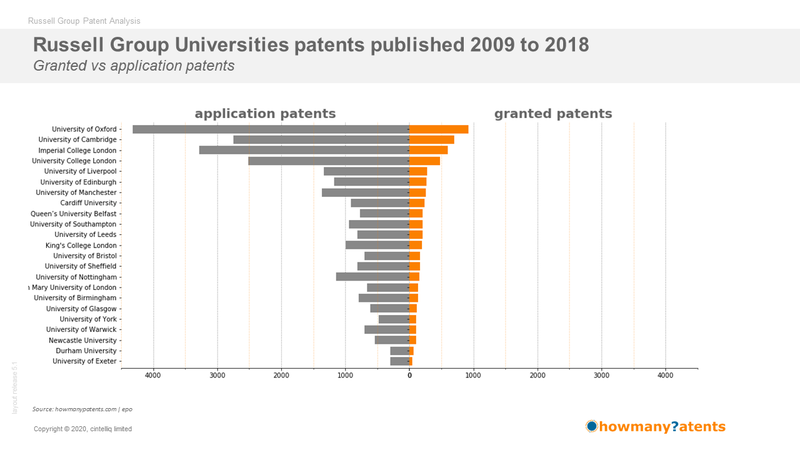 An another approach more suited to counting inventions rather than simple published patents is to analyse patent portfolio in term of patent families. What do we mean by patent families. 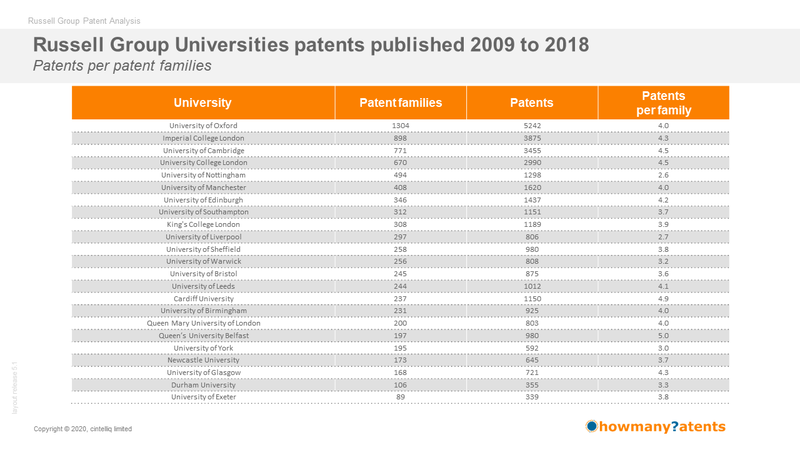 There number of patents per patent family lies between 3.0 and 4.5 for all published patents 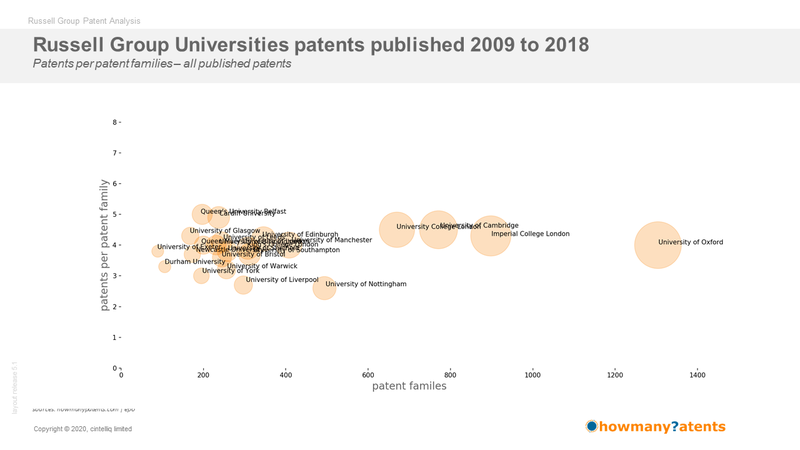 Analysing patent families with early priority dates - those filed before 2009 - have higher number of patents per patent family. Here we see the range falls with 3.0 and 7.0. An explanation for this could be there are a larger number patents per patent because this family has an invention considered to be worth protecting in many countries and many of the applications have been granted. 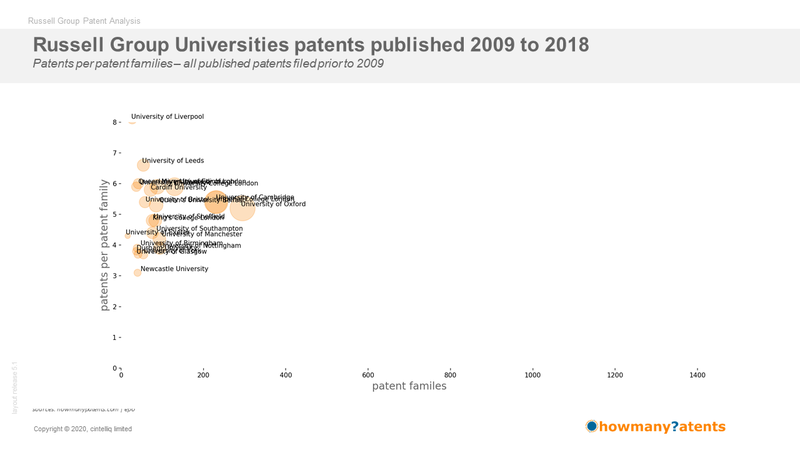 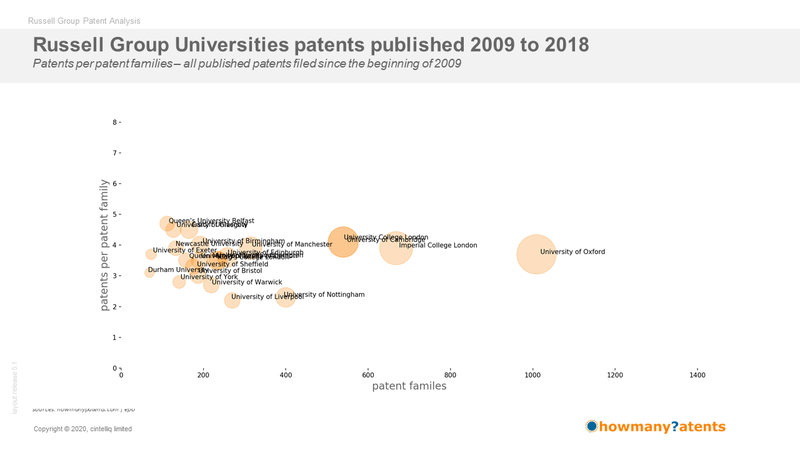 You may be interested in parts II and III:

Sign-up to receive an email when part III is published